At Lea Valley Academy Student Voice is central to our ethos and is embedded within the fabric of the academy. We strongly believe in the importance of our students having a voice within the Academy.

In addition we have 2 main aims:

We want to ensure that Student Voice is accessible to a wide number of students. This would be led by a Student Leadership Team (SLT) spearheaded by the Head Boy and Head Girl in year 11 and two student presidents from our Sixth Form. These students will act as ambassadors for the Academy, and will lead our Student Parliament. The Student Parliament is comprised of two students from each year group. Finally we have our student council representatives of which there are 2 representatives from every form group in the Academy. 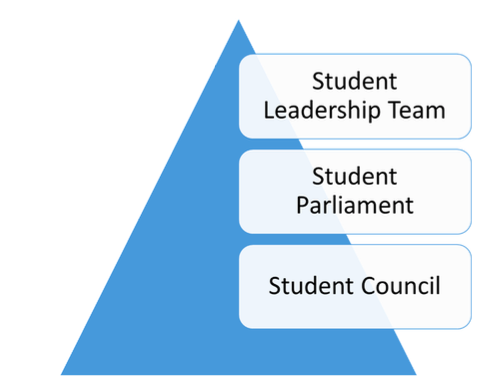 The Student Leadership Team will jointly chair and lead the Student Parliament and support in Year council meetings with the relevant Lead Teacher for Progress. They have an important responsibility in ensuring that the 11‐19 student voice is represented in key decisions and developments within the Academy. The Student Presidents in our Sixth form and Head by and Head Girl in year 11 will represent the Academy and student body at a variety of public functions during the academic year, including open evenings for Years 7 and 12 and all Presentation Evenings. Candidates go through a rigorous selection process including a formal letter of application and interview. The Student Leadership team are selected due to their confidence and eloquence as well as having a reputation as an excellent role model who has contributed well to the Lea Valley Community. They will meet with the Principal regularly and ensure actions are completed. Responsibilities include running the student Parliament, working alongside peers and prefects to foster a sense of pride and spirit throughout the Academy, delivering assemblies and to give key presentations about the school, for example to prospective parents and students at the Sixth Form Open Evening, Careers Conventions and local schools as well as Prize Giving and end of term presentation assemblies.

Role of the Student Parliament:

Campaigns- The Student Parliament will lead termly campaigns, alongside year councils, to deliver themed assemblies and events and promote these. The Student President and Vice Presidents ensure all actions are executed and will organise the publication of information about campaigns through the Year and Council Representatives.

Responsibilities- Representatives from the Student Parliament are expected to take a leadership role and support parents, carers and staff at school events such as Graduation and parents evening.

Student Panels- Representatives from the Student Parliament may also be used to form student panels for interviews; receiving training as appropriate.

Each form has elected 2 student council representatives who had to prepare and deliver a ‘hustings’ speech to the form explaining why they would be a good representative. Therefore the responsibility of form council rep is highly valued and requires students who can fulfil a range of criteria:

The school council will also support in end of Year Graduation Assemblies where the Year Council representatives will help plan and lead the rewards and Graduation assemblies for their year groups.